Organization of a workshop "Leniency Programs Against Illegal Cartels" by Karine Brisset and Kenza Regragui. Link to the photos.
Presentation by Alexis Roussel during the radio program LA MÉTHODE SCIENTIFIQUE on France Culture. Link to the presentation of Alexis Roussel. Link to the entire radio program.
Organization of the 6th annual conference of the French Association of Economics of Law (AFED) at the UFR SJEPG on October 14 and 15, 2021. Organized locally by Yves Oytana and Marc Deschamps. Photos by Nathalie At (www.mamatphotographies.fr): 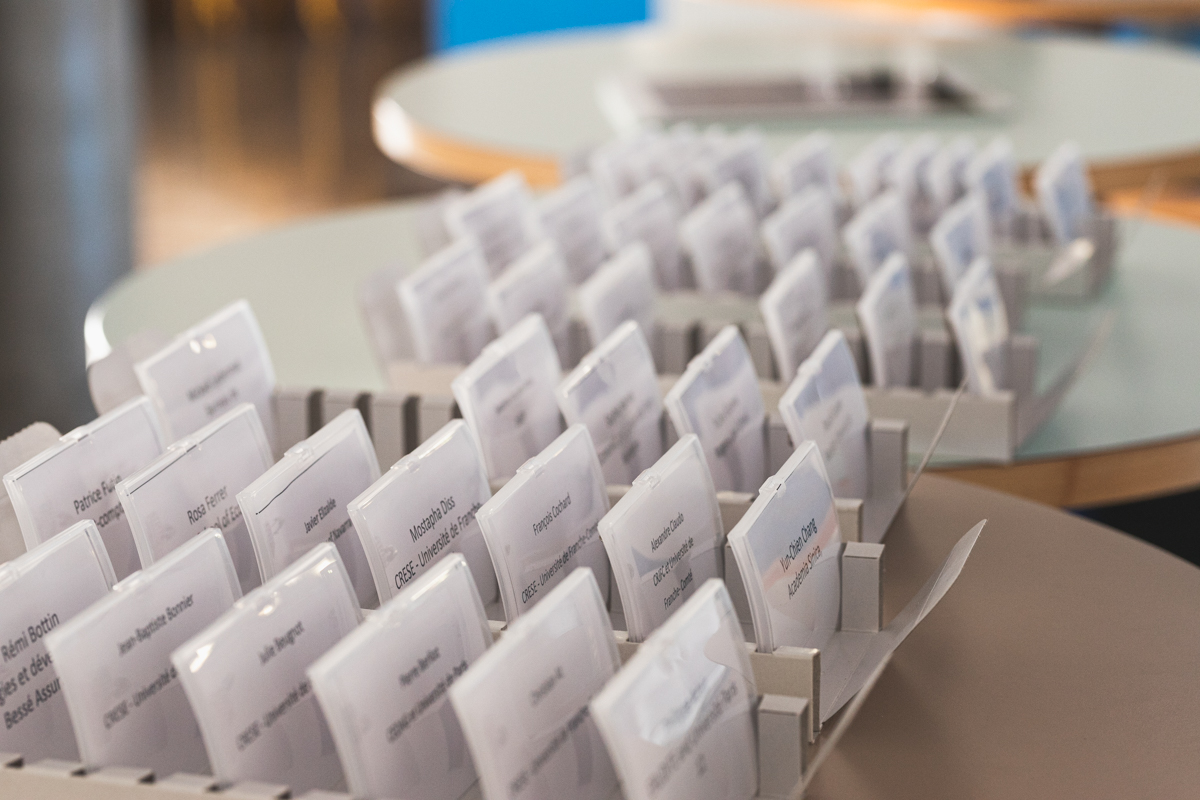 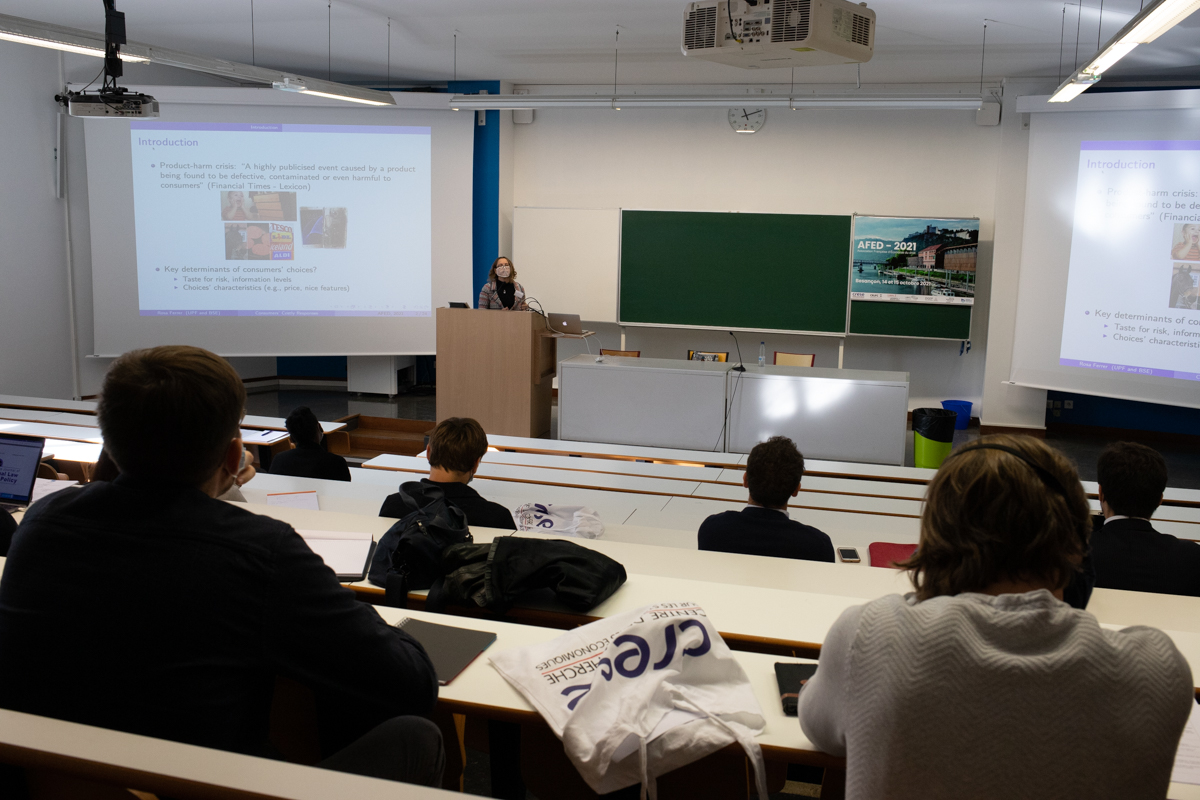 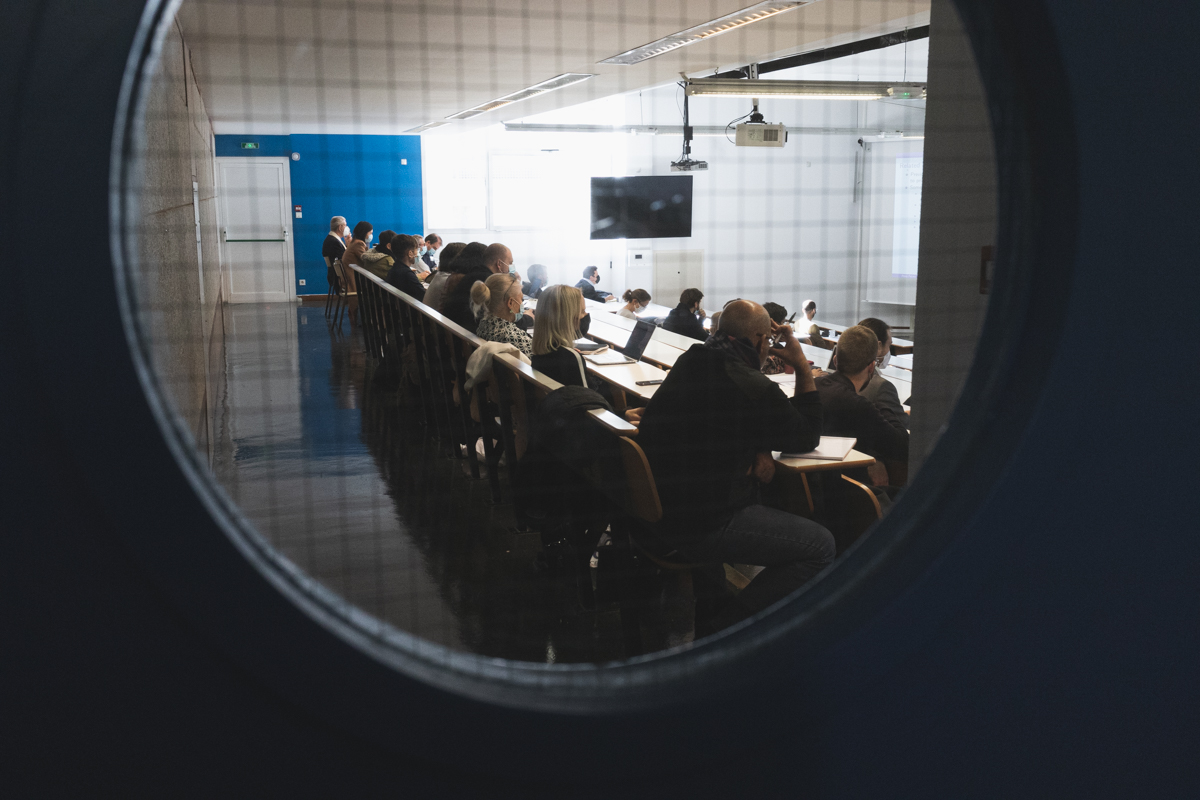 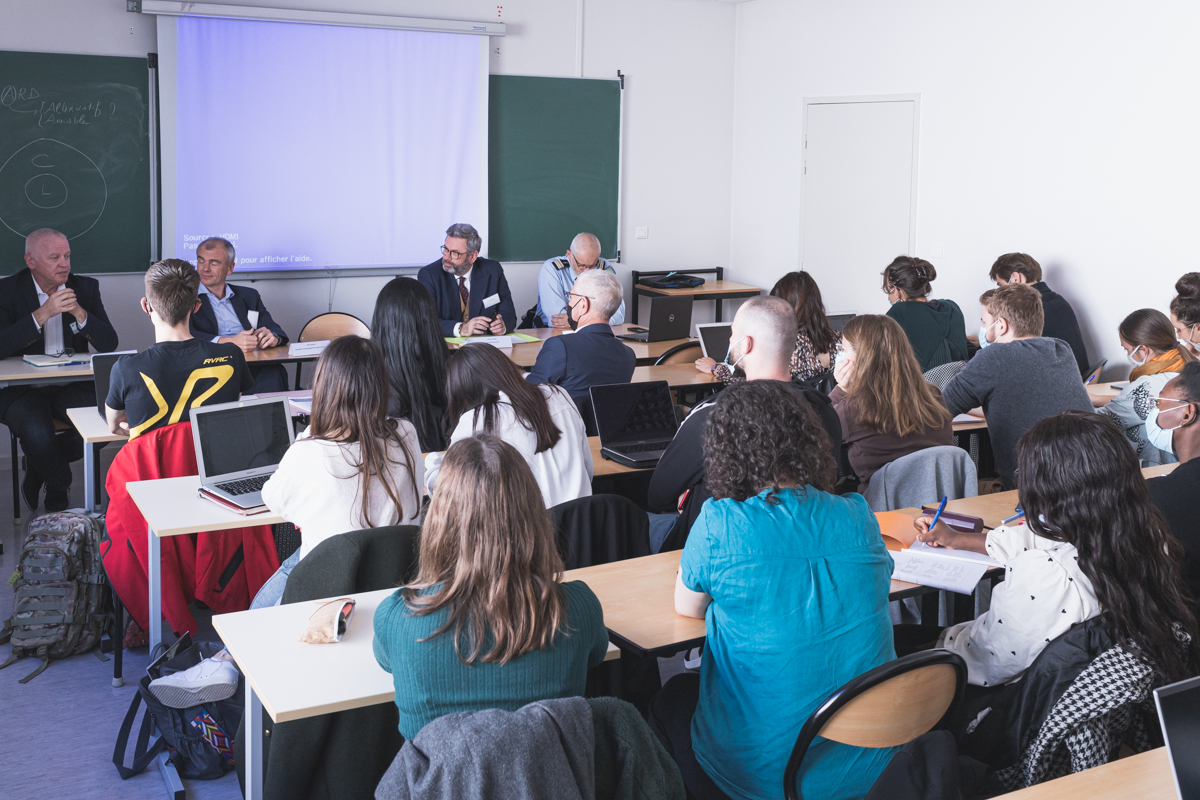 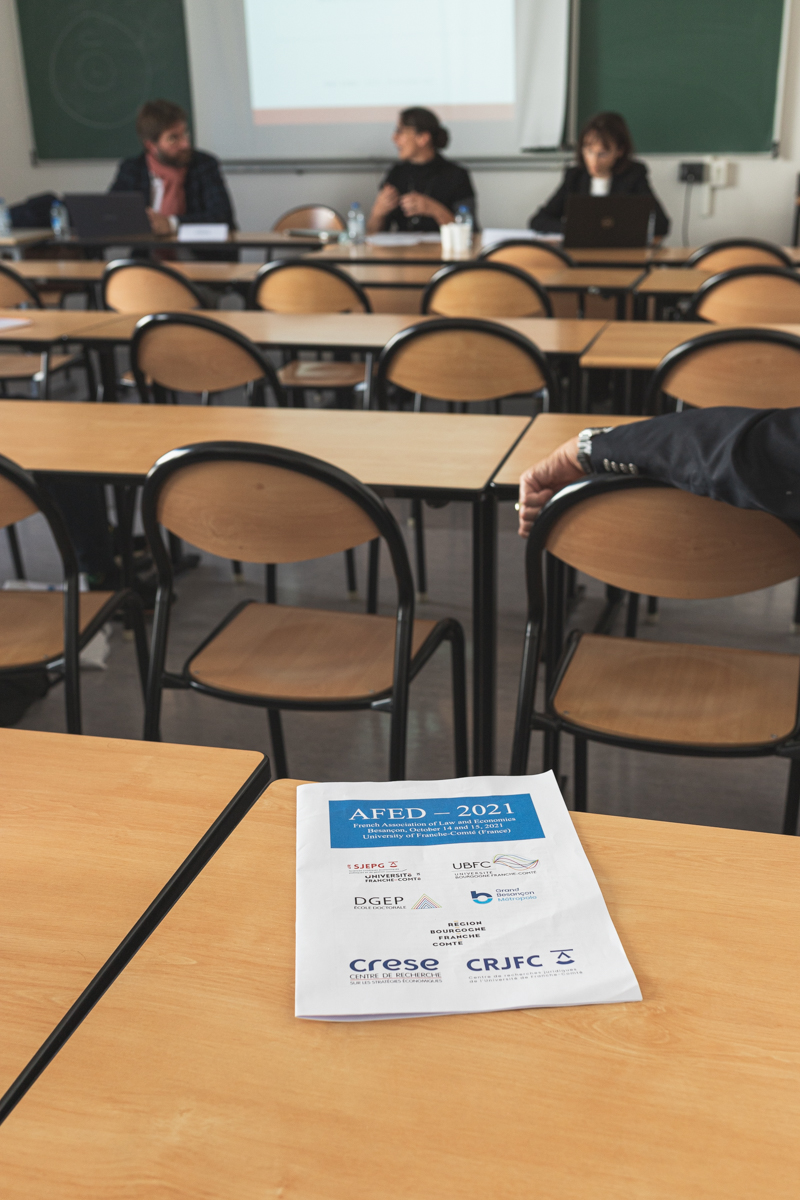 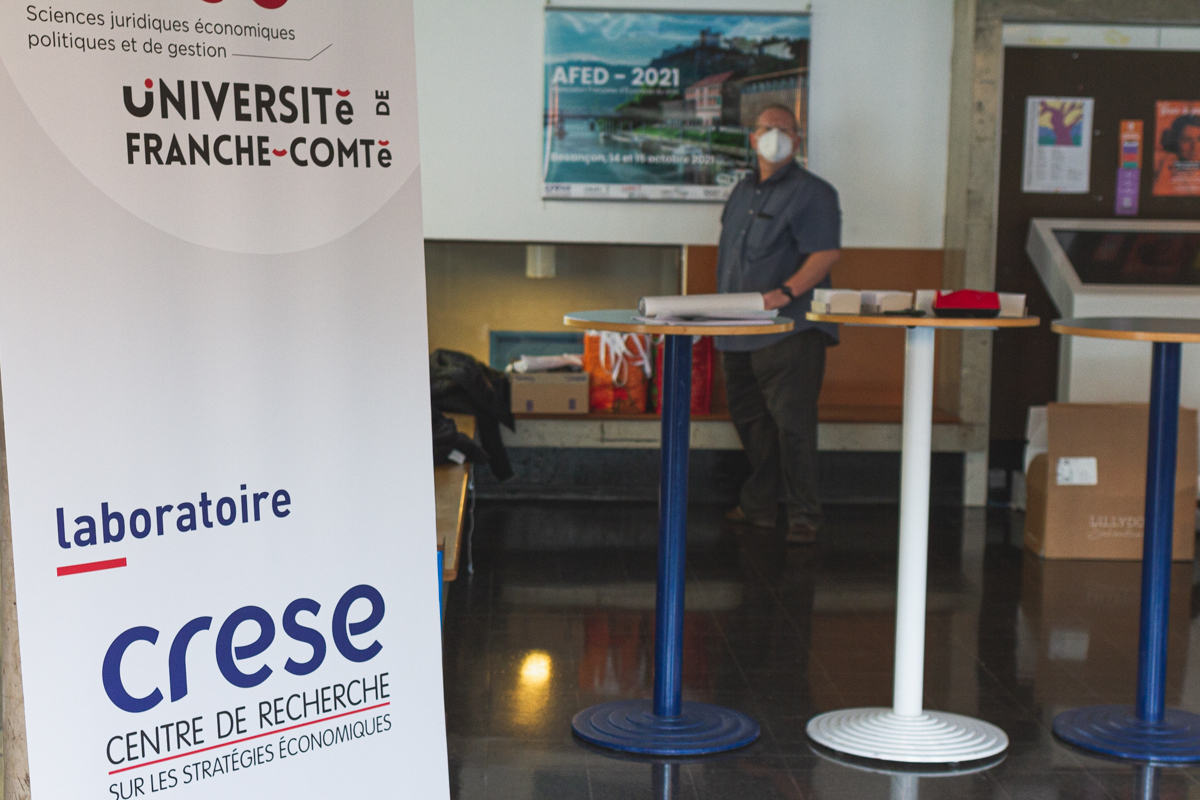 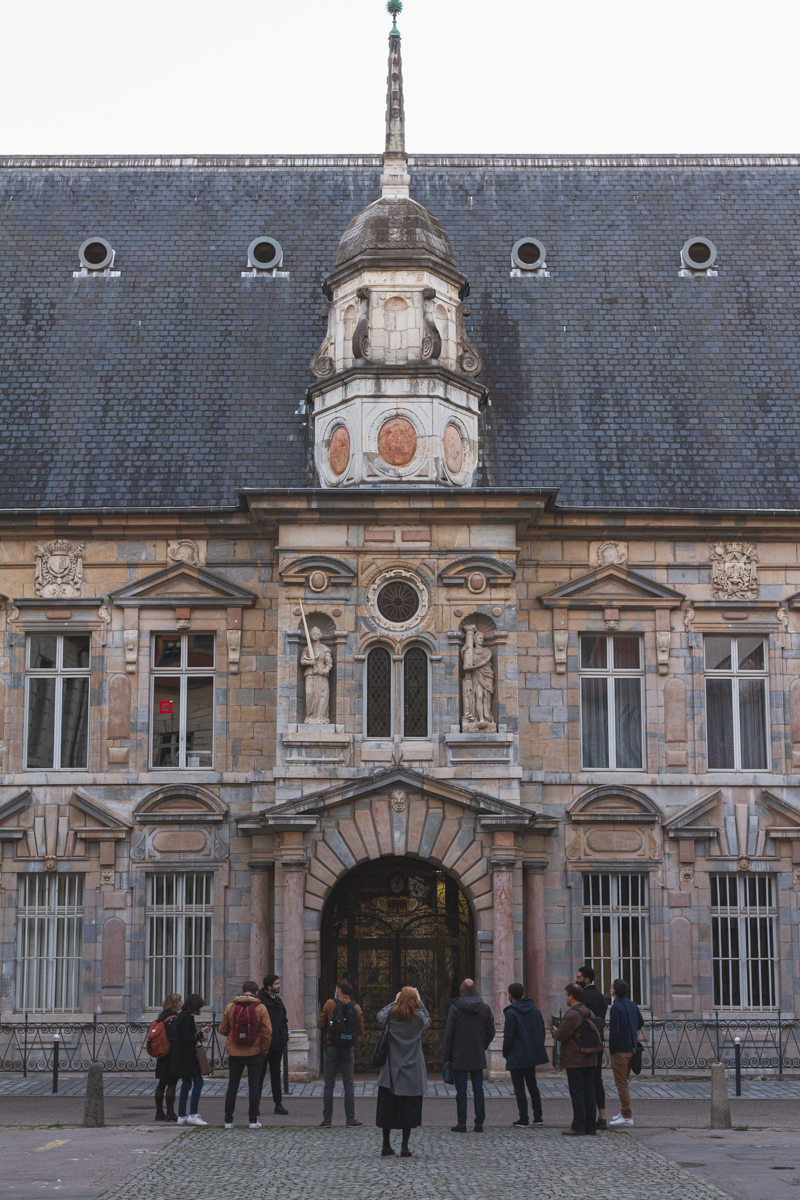 Presentation by Yves Oytana at the event "La Nuit du Droit" at the UFR SJEPG on the theme of predictive justice.

Publication of an article in The Conversation (Sylvain Max and François Cochard): Are women really less competitive than men? Link to the article 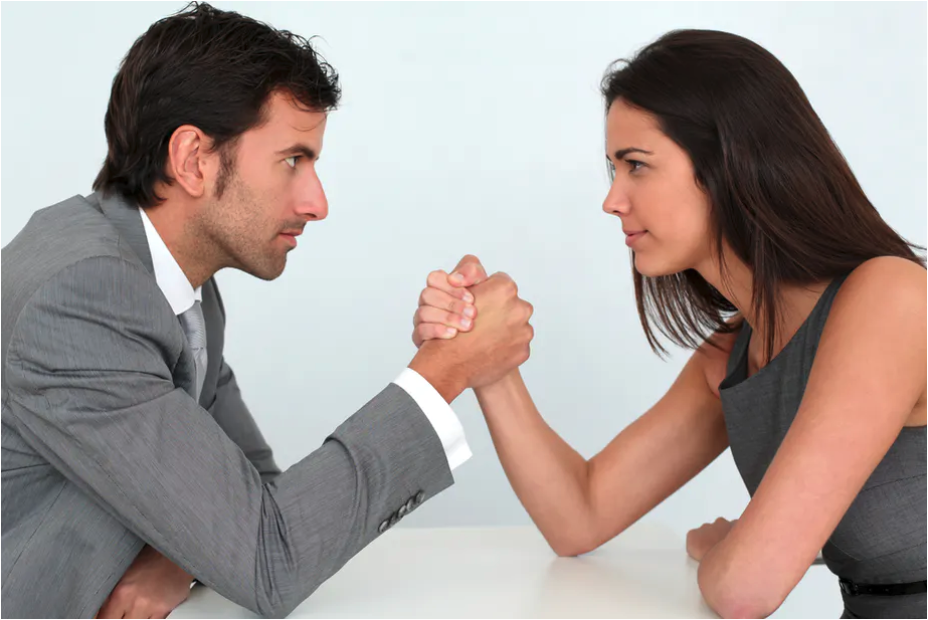 Publication of an article by Karine Brisset (co-written with Alain Alleaume) in the professional journal LDA - Link to the article
Presentation by Karine Brisset at a conference by the Open University on March 6: Effectiveness of leniency programs in the fight against cartels.

Presentation by Catherine Refait-Alexandre at the Webinar "Les rendez-vous de l'épargne", organized by the Banque de France, the AMF and the ACPR, November 2020, "French savings and the "France Relance" plan: The role of Fintechs".
Interview with Michel Mougeot and Florence Naegelen, "Who says better for auction theory", En Direct n°291, November/December 2020 - Link to the article
Article by Mostapha Diss: "Flaws in the majority voting system", published in En Direct - Link to the article

Marc Deschamps in a conference for a large public - Press coverage

Catherine Réfait-Alexandre made an presentation at Crédit Agricole Franche-Comté's "Seminar Managers": "Negative interest rates: what are the challenges for retail banking, today and tomorrow? "(Vittel, September 2019) 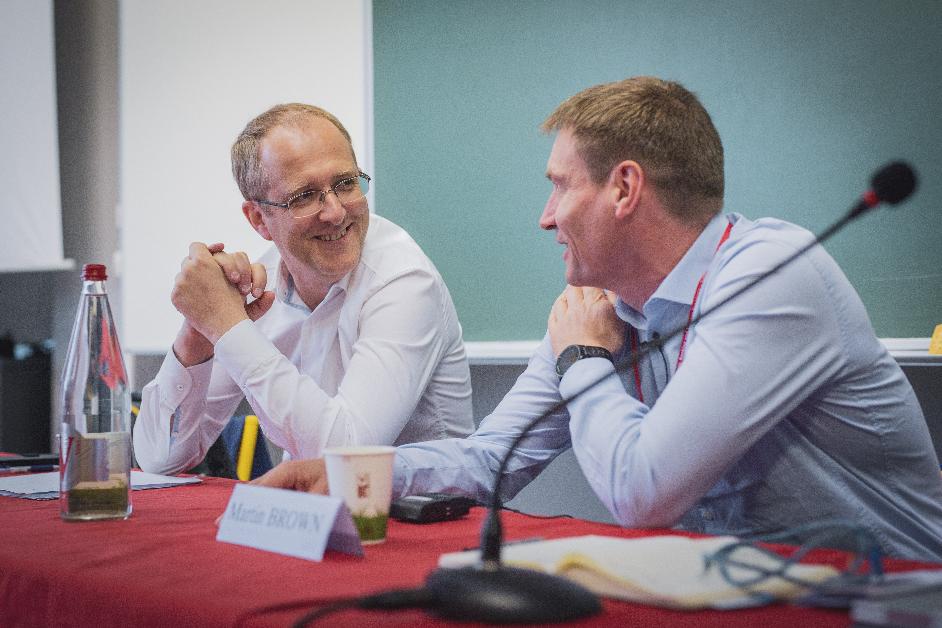 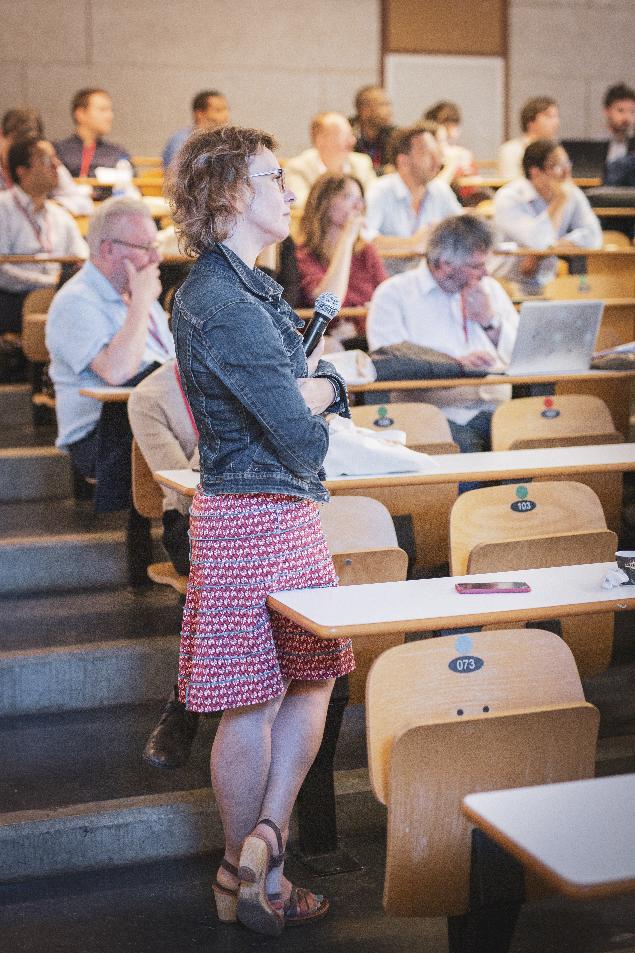 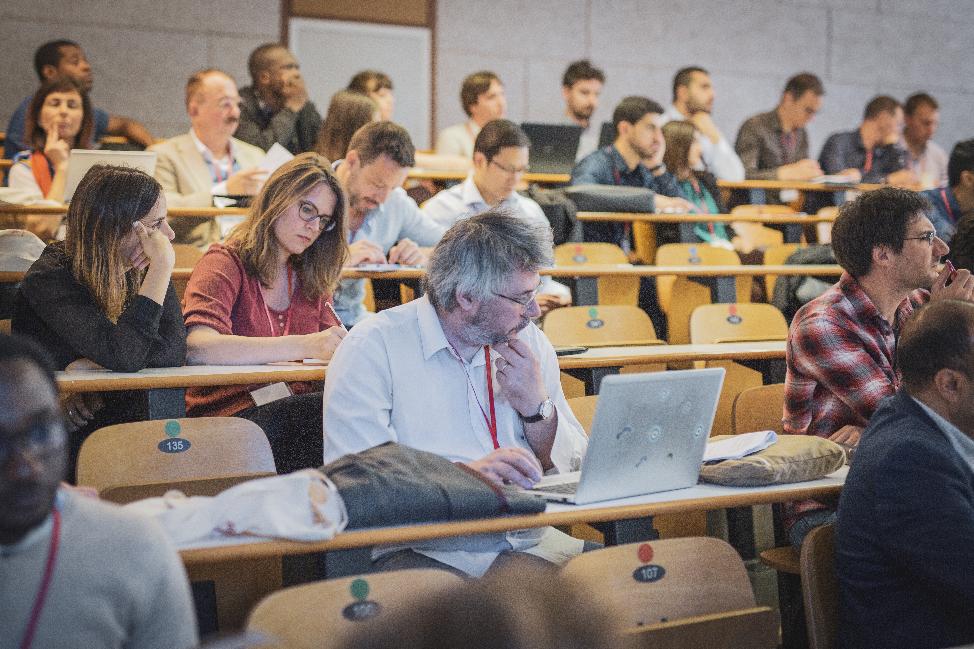 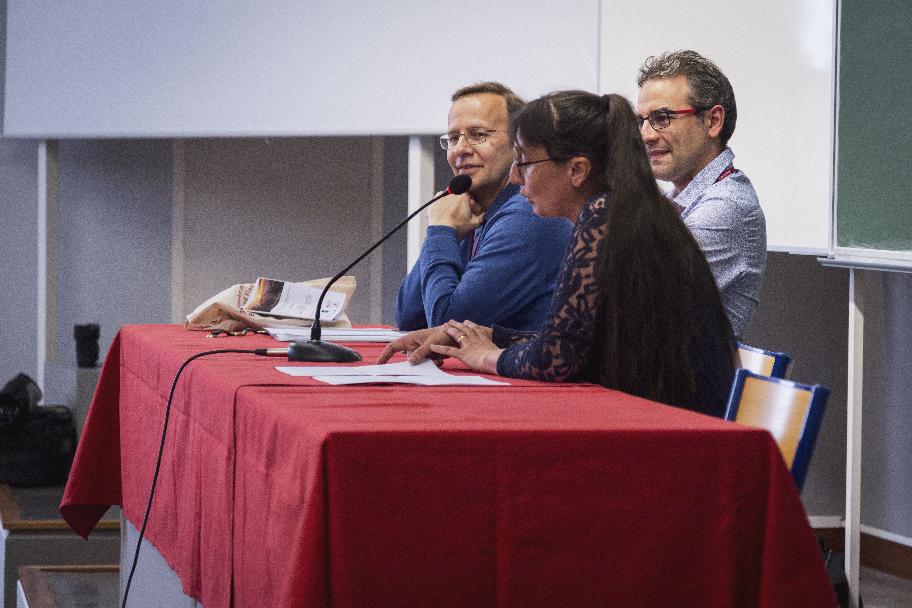 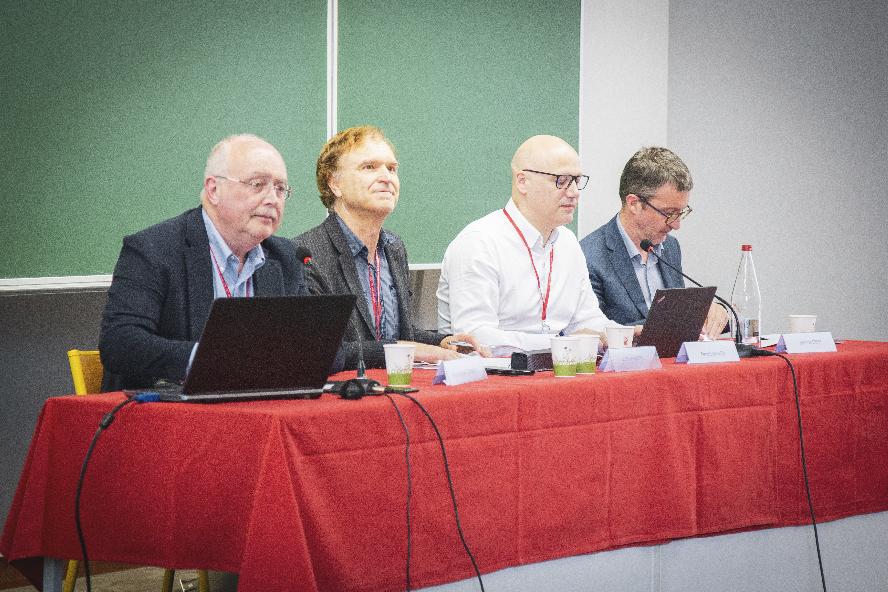 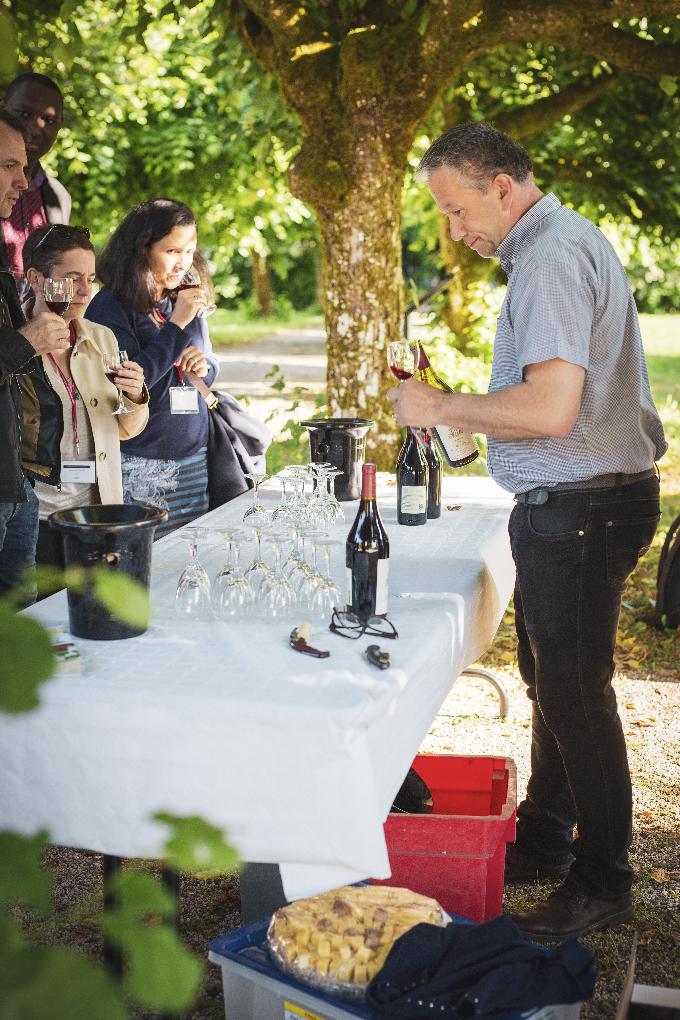 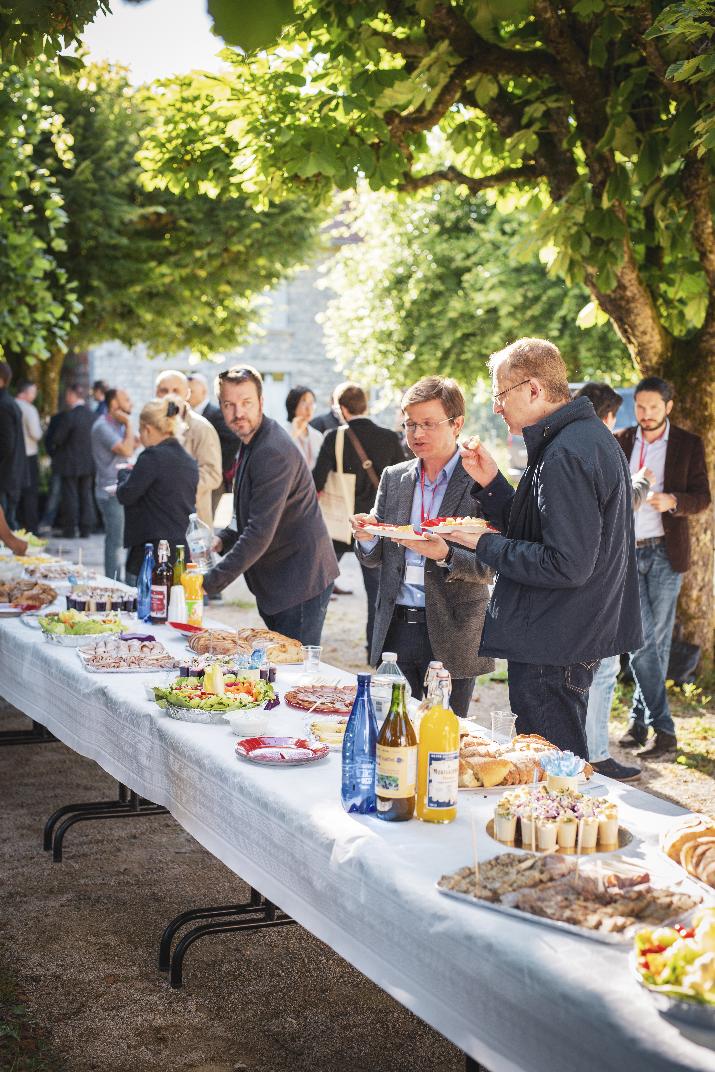 Marc Deschamps co-wrote an article in The Conversation and participated in a radio show. Article - Radio

Marc Deschamps talks about financial compensation when parents are late at school in the periodical "En Direct" of the University of Franche-Comté. Download 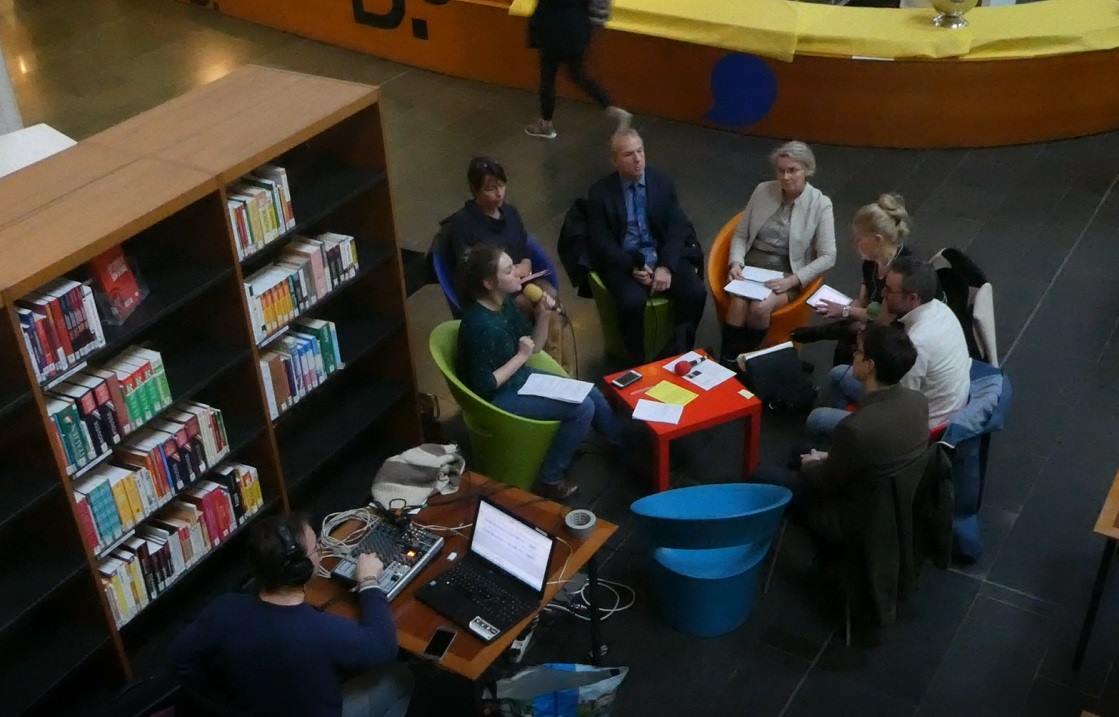 Interview on Radio Campus Besançon by Cécile Pollart around the 50th birthday of the UFR SJEPG with the different department CRESE, CREGO et CRJFC. Podcast

Vincent Bertrand in The Conversation :

Marc Deschamps’s interview by Xerfi on the economic expertise and the law of concurence :

François Cochard’s talk "Economics behavior : Are we Einstein or Homer Simpson ?" in the context of the MSHE Thursdays. Download the poster and the summary. He was interviewed by the Est Républicain: 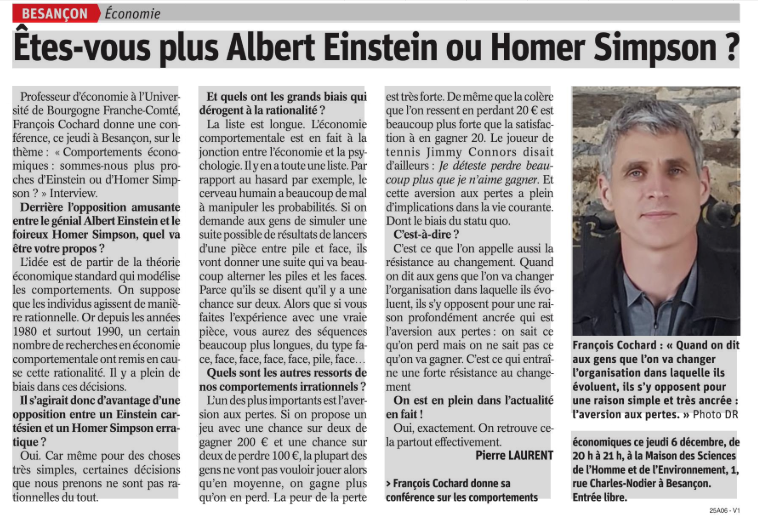 Vincent Bertrand organizes a recurrent workshop on energy transition in the North Franche-Comté in partnership with the CCI of Belfort and the Climate Economics Chair at Paris-Dauphine University.  The aim is to organize meetings between industrial, institutional and academic actors, in order to exchange on the economic and legal issues related to the energy transition in the industrial territory of North Franche-Comté. The first three editions took place in 2018:

Some photos from the launching conference:

Marc Deschamps is interviewed by Xerfi on the choice of host country by migrants:

Melanie Heugues organized a workshop on open innovation on April 5, 2018, during which academics, elected officials and entrepreneurs were able to exchange - Download the program

Presentation by Marc Deschamps on "Should we punish financially parents who come to pick up their children late?” in the context of the MSHE Thursdays - Download the poster and the summary - Press coverage. He is also interviewed by Xerfi on this subject:

Presentation by Karine Brisset on "Online auctions : A new way of transaction for second-hand luxury ?" in the context of the MSHE Thursdays - Link to the poster and the abstract

Nicolas Rivière supervised an evaluation of the monitoring and social support system (DIVAS) in collaboration with the Bourgogne-Franche-Comté gerontology center. The study involved 60,000 questionnaires filled out in 2015 by retirees as part of an information and sensitization campaign on actions conducive to "aging well", and the detection by factors of frail elderly people.

Fabien Labondance supervised a group of students in charge of the organization Xavier Timbeau's conference (OFCE).

Karine Brisset is the winner of the prize for the best communication in research at the International Watchmaking Marketing Days in Switzerland. 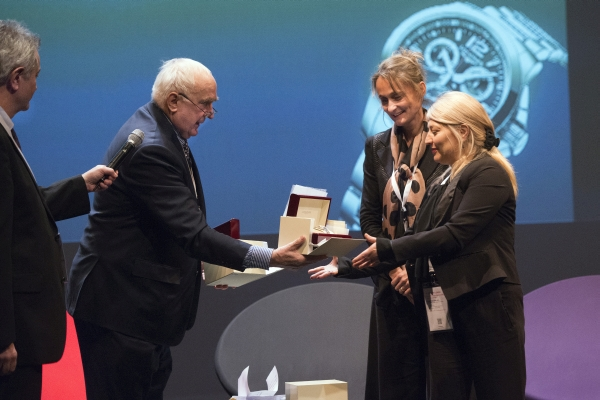 Eric Rimbaux at the IHEDN (Institut des hautes études de défense nationale) between the competitive gap between France and Germany.